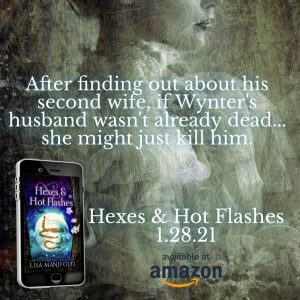 Time to meet Wynter! Last week, I shared with you all my new reading obsession – PWF – that has now become my writing obsession. I’m releasing a new series this month called The Oracle of Wynter, and it’s about a 45 year old woman named Wynter Chastain. Her three kids are all out of the nest, and her husband Scott recently passed away. He was a helicopter pilot and owned a tour company that worked in the Grand Canyon, so he spent at least six months of the year working away from home. Wynter has been dealing with all the stuff that comes with a person’s passing, and getting used to her new life when she gets a visit from Scott’s life insurance agent. She doesn’t get everything she thought she would because lo and behold, Scott has another beneficiary that is entitled as well. His other wife.

And that’s how the book starts. With news of the other wife.

I can’t even express to you how much fun I’m having writing this new series, even as I toss a whole heap of nonsense on Wynter right from the get go. Next week, we’re going to meet the ghost. Because this is paranormal fiction, so there must be a ghost!

See you next week,
Lisa