This has been a busy summer and fall, and all of a sudden, it’s nearly winter. Well, it’s trying to be, here in Colorado. I’m in the midst of working through National Novelists’ Writing Month (NaNoWriMo), and although it’s been four days of no words, because life,  I spent the last day reading.

In my defense,  I spent the day before at a bazaar, and then another author event, so I am giving myself a pass.

And here I am, up late – or early – as hell, because I slept in this morning, and couldn’t sleep. That, and I got caught up in reading.

For those of you who don’t know, I’m a speed reader. I took a semester-long class in school, and I’ve been able to race through books ever since.  Tonight, I made it through a series that had me laughing so hard I cried. Like, snorting crying laughing. It woke up the dog in the vicinity and he started to growl ominously at me. I think his eyesight’s on the way out, so I won’t hold it against him. I did burst out laughing.

I also laughed in all of the books, which means the author was amazeballs at keeping up the humor. Her dialogue is hilarious, as are the characters themselves. They think in funny. I know we all think we’re friggen comedians, but the main characters in the series are, and they don’t even know it.

So without further gilding of the lily, the series is called THE REGENCY ROMP. It’s by Maggie Fenton. The first book is THE DUKE’S HOLIDAY, the second VIRTUOUS SCOUNDREL, and the final is called THE ALABASTER HIP (is that a great name or what?).

These are Regency romances. They follow the genre well, which, as a lover of Regency, I’m glad about. They are not overly steamy, although there is definite heat and a bit of steam. So if you’re looking for multiple sizzling encounters, these are not it. Don’t let that deter you, however.

We meet the first of the cast of characters in THE DUKE’S HOLIDAY.  The Duke of Montford (called Cyril by no one ever), has to head to York to sort out a family who has a lease on one of the ducal estates. There’s a hint that somehow, the Honeywell family got one over on the Montfords, and while the current Montford has no idea what it is, he’s all out of sorts about it. He’s so funny – even at the beginning, when you start to realize that he’s really not. That funny borders on frenzy. 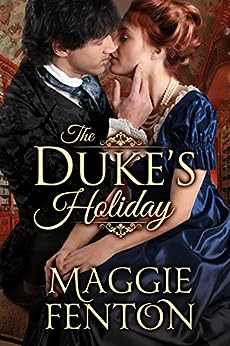 So he is all determined to make things neat and tidy and boot the scheming Honeywells out on their upstart arses, but of course, it doesn’t go the way he plans. The way that Maggie Fenton shows you his progression from neat and orderly to real and living is both heartbreaking and howlingly funny. Ms. Fenton is brilliant with words. Witness:

“Marlowe sniffed. “And it’s no less than you deserve. Really, Monty, don’t know what’s come over you. But even I don’t tup a wench in the middle of the King’s Highway. It’s just bad form.””

I stopped reading to sit and laugh for a good five minutes over this scene. A great deal of the dialogue is like this. God help whoever comes across Aunt Anabel, as well. She needs her own story. I’m just saying, Maggie Fenton.

There is also a Wesley, and a Princess Buttercup. I knew when I was reading this I was reading a fellow fangirl. Which warmed my fangirl heart.

The second book is VIRTUOUS SCOUNDREL. This book focuses on Sebastion (I love that name) Sherbrook, the Duke of Montford’s BFF, a couple of years after the happenings in book one. 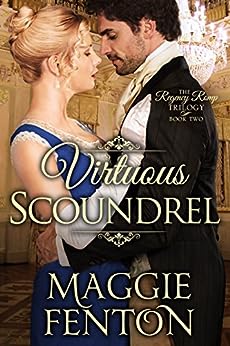 He’s coming home after rattling around through Europe, and he lands face first into a scandal of monstrous proportions. Apparently, he’s been a complete rake whilst on the Continent, and a weeping, formerly virtuous young lady has confessed all to her father. Dad is now demanding Sherbrook marry said formerly virtuous daughter. He’s also inherited the title of Marquess of Manwaring, but that doesn’t stop his descent into social Siberia.

He’s also plagued by the wife of the recently deceased Marquess, who happened to be his uncle. They were estranged, and it was never reconciled. The Dowager Marchioness Katherine, who was far too young for his uncle (IMO) haunts him. We met her in book one, and she was cool as a cucumber and droll as hell. But still waters run deep for both Sebastion and Katherine, as does their love of Beethoven. The descriptions surrounding the scenes where music is forefront are lovely.

The witty writing continues. Ms. Fenton titles her chapters. As a fellow author, I commend her. I never feel clever enough to title mine, and she titles every single one.

In Which Our Hero’s Hessians Die An Ignoble Death
In Which Fate Takes an Unexpectedly Unpleasant Turn in the Dodgy Part of Soho
Followed by a chapter break, titled Meanwhile, in the Chic Part of Soho…
And:
In Which The Bad French Melodrama Proceeds Apace on Bruton Street

The chapter titles are just the openers. Romance aside, this is where we meet Soames, a secondary character that pops up and mangles the ever-loving daylights out of what is supposed to be the English language, and you just cannot help yourself. You lean back, and laugh some more.

Katherine and Sebastian, like Montford and A. Honeywell in book one, have a metric ton of challenges that face them. I would like to think I could be so droll and witty in times of crises, but I’m not sure I would be.

Finally, in THE ALABASTER HIP (note to Ms. Fenton – your poetry was fine, and it came from the heart), the main focus is Marlowe, the non-King’s Highway tupper from book one. He’s the last of the BFFs to be a swinging single, and while he moves about London dressed in a manner I had to Google, he’s not thrilled with being a bachelor, no matter how resigned he is. 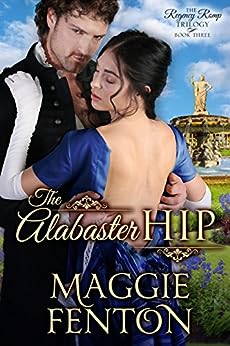 In comes Minerva (we’ve met her before, and if you’re a good romance reader, you were waiting for her to show up, as Ms. Fenton gave us a hint earlier in the series if you were looking), the woman he (and all of London, frankly) is hoping will wrangle Marlowe’s twins into some semblance of seemingly law-abiding behavior as the latest in a string of governesses. She is feisty as hell, taking no shit from anyone.

This book was where I KNEW, having merely Strongly Suspected before, that Ms. Fenton is a member of some sort of fandom, because she brings one of the things close to my heart into her work – fanfiction. The Author’s Note at the back explains it further, and it was fascinating. I went and Googled that, too (I’m not telling you what it is, because it’s a pleasure to discover as you read the book).

The Leighton family matters come to a head as well (Marlowe is a Leighton) and you will roll your eyes at the unabashed and blatant behavior of some of his relations. Honestly, when I realized where this series was going, I was concerned about how Marlowe would hold up as a hero. As the sidekick and devil-may-care he has been up until getting his own book, it’s legit. But Ms. Fenton did a great job bringing him up to snuff for the hero’s…um…red Chinese silk banyan cape (another trip to Google). Finally, he’s at the place where he can put it on, and we are like, Yeah, that works. Previous books – no.

Both Marlowe and Minerva have baggage to disperse with and ghosts to face, and it was realistic, to me, at least, how these matters were addressed. The hilarity of dialogue and turn of phrase continues. The chapters are all still titled. Chapter Sixteen, In Which The Viscount Suspects Something is Amiss is so tongue in cheek, you’ll burst into laughter several times throughout. Well – how about you should burst into laughter?

Aunt Anabel is back and can I please request, again, that her story be written? She is my kind of aged auntie. I also want to know who was still making her pompadour wigs in the time period. The descriptions are fascinating.

As this is a romance, there is a happy ending. Not just for Marlowe and Minerva, but for a lot of the characters we’ve met along the way. Which I love.

I am giving all three books a thumbs-up and a recommend you should read. These won’t change the world. But they will make you laugh, and as unbelievable as some of the challenges presented in the books seem, they are approached and led up to in a manner which makes you say, Well, yeah, I can see how that could happen. You will keep turning the pages (I know I did) because the characters are real, and flawed, and you like them. The redemption of Marlowe was fantastic – and he wasn’t a villain or anything, but we didn’t meet him a hero.

Well done. I might need to read these again, because I liked the way reading them made me feel. Which is the highest praise from me. I’m a re-reader. So if your books get into my loop, that says something.

Now go get the first book. If you read Regency, you’ll be glad you did.

2 Replies to “Up too late reading…”